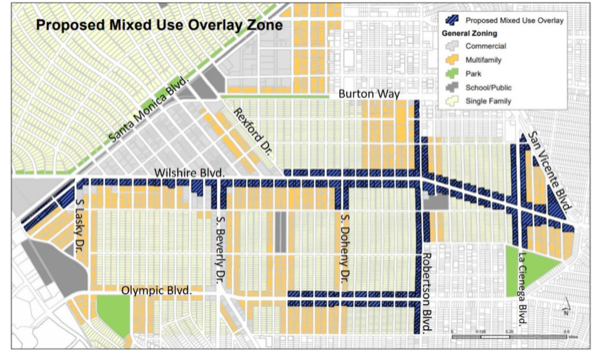 In anticipation of two future Beverly Hills subway station areas at Wilshire/La Cienega Boulevard (La Cienega Station) and Wilshire/Beverly (Rodeo Station), the Beverly Hills City Council approved a General Plan Land Use Map Amendment to allow mixed-use developments in certain commercial areas of the city and to apply a city ordinance that would create a mixed-use overlay zone on select commercial corridors. The use of an overlay zone will be beneficial in that it would allow property owners to comply with the underlying commercial use regulations and allow new mixed-use development projects with certain ground floor commercial uses and residential levels above.

The Beverly Hills City Council considered the approval of a mixed-use zone ordinance for several months. The ordinance would “establish uniform standards for mixed-use development in the City with the goals of providing flexibility for property owners who wish to build housing and commercial space, respecting adjacent residential communities, encouraging a mix of housing types in the city, and revitalizing commercial corridors in the City, especially those near transit.”

According to the Southern California Association of Governments (SCAG), a necessary component of any City’s housing policy strategy is to reform existing restrictions on housing development. Every eight years, California law requires cities to assess zoning capacities for new housing units to accommodate population growth through rezoning. This process, known as the Regional Housing Needs Assessment (RHNA), determines housing needs for different regions.

The mixed-use zone ordinance would only apply to commercial corridors outside of the Beverly Hills commercial business node known as the Platinum Business Triangle. The City’s strategy is to preserve the Business Triangle as an area that is primarily commercial in nature, which would maintain an area where businesses can operate into the evening without disrupting potential nearby residents. The Beverly Hills City Council recognized placing the mixed-use zones along La Cienega Boulevard, Robertson Boulevard, Olympic Boulevard, Doheny Drive, San Vicente Boulevard, South Santa Monica Boulevard, and South Beverly Drive adjacent to the two future La Cienega Station and Rodeo Subway Stations could incentivize property owners and developers to propose transit-oriented mixed-use housing development projects.

The City of Beverly Hills has only seen a handful of urban developments along commercial corridors come to fruition in recent years. Recent proposals include the ‘One Beverly Hills’ which proposes two high-rises adjoining the Beverly Hilton and Waldorf Astoria hotels. Beverly Hills recently approved the city’s first significant mixed-use building at 9200 Wilshire Boulevard which is a 54-unit condominium project by Manhattan developer Michael Shvo.